When Alan was young, he played a lot of football, and he was very good at it, but then he went and worked in a town, and there was no team for him there, so he stopped playing.
艾伦年轻的时候，他经常踢足球，而且他非常擅长，但后来，他去了一个镇上上班，那儿没有足球队跟他踢球，于是他就不踢了。 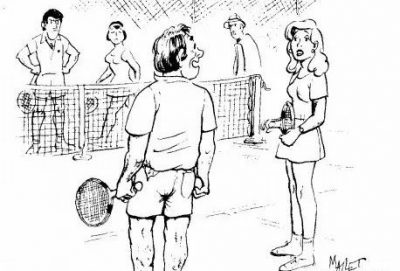 Then he began to get rather fat, so he thought, “I’ve stopped playing football, and now I’m getting fat. What am I going to do?” He thought about it for a few days, and then he said to himself, “I know: I’ll play tennis.”
后来他变得非常肥胖了，于是他想：“我已经不再踢足球了，现在我变胖了。我该怎么办呢？”这事他想了几天，然后他对自己说：“我知道了：我要打网球。”

He had a few lessons, and then played for a few months.
他参加了几堂课，然后又打了几个月。

He met a girl at the tennis club one day, and they played a game of tennis against another young man and woman. Alan played very badly, and was very angry with himself, “I’ve never played as badly as this before,” he said to the girl.
一天，他在网球俱乐部遇到一个女孩，他俩跟另外一对年轻男女打了一场网球比赛。艾伦打得非常糟糕，对自己很生气：“我以前从来没打得这样糟糕过，”他对那个女孩说。