7 Signs Your Boss Is Horrible

So you think you have a bad boss. You actively dislike her, and sometimes you count how many days you can go without having to have a serious interaction. But you doubt yourself. Maybe it's not as bad as it seems. Maybe it's just you. 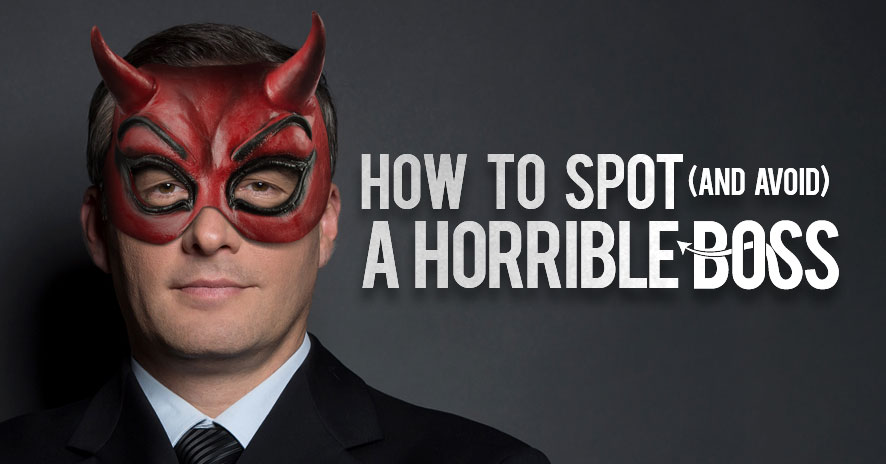 If you're not sure if your boss is impossible, look for the characteristics below. It's important that you figure this out, because a bad boss doesn't just make you feel bad, but can make you more likely to get sick, too.

1. Your Boss Has Astronomically High Standards

Does your boss hold you to standards that you can't actually meet? Does he expect you to perform better and better each month, even in your slow season? Does she praise only top performers?

All of these are different ways of having standards that are too high. No one can be at the top of their game all the time, and a good boss will understand that. A boss who is so difficult to please will make you feel badly about yourself, no matter how well you do your job. And that is an impossible situation for you.

2. Your Boss Is Never Wrong

Does your boss have to be right in every single conversation, whether it's about doing business or March Madness brackets? People who always have to be right are impossible in any situation, but they are particularly damaging at work because they can't empower their employees. Instead, they end up shooting them down.

A good boss will be able to admit mistakes, but will also point out good ideas that come from sources outside herself. She will be willing to implement these ideas, to get behind them, and she won't claim them as her own when someone asks.

3. Your Boss Offers No Guidance

An impossible boss doesn't help you set goals, aim for a particular level of performance, or anything else. If you don't know where you are going and your boss won't discuss it with you, you can end up in any number of impossible situations.

Many times, you end up in an impossible situation when your boss won't offer guidance because, whether they say so or not, they have some idea about how they want you to perform. You can be going along thinking everything is fine, only to find out at some point that you haven't met some standard. That's maddening because it doesn't give you a chance to try something different so that you can improve.

When you present your boss with a new idea, how does he respond? Is he open and willing to hear more, or does he shoot it down simply because it's not the way things have been done before?

Impossible bosses are so afraid of change that they aren't willing to innovate. Often, they want their employees to sit down, shut up, and do the work the way they were trained to do it. While that works some of the time, it's impossible to move forward without innovating. New technology and processes come out all the time and adaptation is essential to growth.

5. Your Boss Is Inconsistent

Does your boss promise things but doesn't follow through? Does she seem to forget that she has committed to things? This can make you feel like she doesn't really care about her employees, or that everything else is more valuable to her than you are.

This characteristic makes your boss impossible because you can't trust her. You never know when she will follow through and when you will be left in the dust wondering what happened. This distrust will eventually spread, until you just may avoid dealing with her because of how you feel afterwards.

When you have work-related concerns, you've got to be able to trust that your boss will listen to you. Whether you have a question about some new software, need to report a co-worker, or feel like someone is asking you to perform a task that isn't part of your job, you need to be able to talk to your boss.

If you can't talk to him, you can end up feeling stuck. If there's no way to move forward without help and you can't get the help you need because your boss won't listen, there's not much you can do. It's impossible.

Whether your boss's communication problems stem from her not being available or willing to talk, or because she thinks she's explaining things when she's actually not, a boss who can't communicate is impossible.

If you don't know what to do or how to go about it, you will either end up doing nothing or doing something wrong. When mistakes come about because an employee was never given clear instructions, that's frustrating. And when your boss thinks she communicated well, it's even more difficult.